K: Woah. The feeling of having someone acknowledge and appreciate your art is unmatched.

Thank you Christian for giving me that feeling.

I make music to escape my reality. It’s not that my reality is bad, but I find myself lacking creativity at times. Music gives me a chance to make something, have control over how it’s made, and admire what I’ve done. I love sitting back after putting together a track and just thinking, “I put this together, and it’s good!” Making music has been a process for me, (as it is for most people) but I think it’s safe to say I’ve found my niche in sampling. It’s fun to take an existing piece of art and give a new feeling to it.

Thank you bthearchitect for introducing music to me as a creative outlet. Thank you to everyone listening for allowing these sounds enter your ear holes. Enjoy.

Thank you Blakk for making us smile when you were here. Thank you Martin for every word of wisdom. Peace to your soul.

C: Last year the Soundcloud algorithm did its thing and started playing Kevin’s remix of Nipsey Hussle’s Don’t Forget Us randomly one night — I’d not heard much of Nipsey’s stuff in the past but this remix instantly connected with me through the production. It got about a dozen replays before I finally reached out to get a download and he was nice enough to share with me. Sadly just a few months later Nipsey Hussle was killed.. I found myself coming back to this track and digging more into the thou.sand account after that. I was finding gem after gem and I knew that as I was starting work on the first release for unseen.boutique that I’d love to put something together with Kevin next (should I be lucky enough to even hear back on this idea of mine!) To my surprise I heard back that very night I contacted him and the rest is history!

What draws me to Kevin’s music is his ability to craft so many emotional themes within these remixes, being so transformational through the unique texture and soul added within his work. In some cases he’s elevating modern hype tracks while in others he’s able to morph classics and turn them into something even more special to my ear.

On top of all the music, he’s a great photographer too! His work can be found in the album art for this release and you can also find him on Instagram. While you’re at it, be sure to check out the Soundclouds here & here too.

I will bring this back to Nipsey Hussle, whose track made this release possible through the connection made between Kevin and I. I’d recommend that anyone who is unfamiliar with him as I was originally to read up about his work to try and make the world around him a better place. RIP 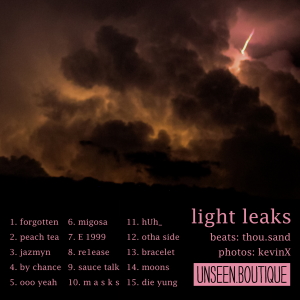